History of the Morehead-Fair House 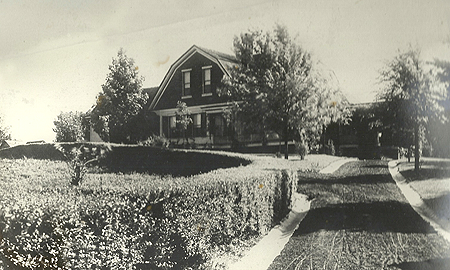 Prominently sited at the crest of a hill, this large one-and-one-half frame house is one of Eden's most exuberant examples of the Queen Anne style with its irregular form and variety of rooflines and materials. Several shed-roofed dormers accent the gable, clipped gable, and bambrel main roofline, split shake shingles. German siding, and grids of decorative trim cover the upper elevations; and ornamental bargeboard appears in the bambrel and one of the gables. The deep wraparound porch supported by heavy turned posts is expanded by a porte cochere and spool frieze on the main facade and by a semicircular patio on the northeast elevation. The conversion of the south end of the porch to a sunroom concealed a one-story polygonal bay, still indicated by the polygonal roof above. 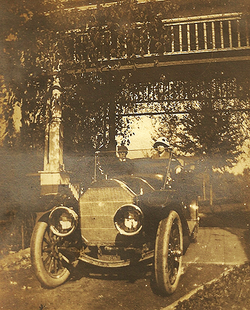 The house was built at the turn of the century for John Motley Morehead. When John M. Morehead, II, and his family moved to Charlotte around 1918, the James D. Taylor family lived here a few years, succeeded by E. D. Pitcher and his family. According to Eden historian James E. Gardner, Pitcher, who had served as a mill administrator for the Morehead and Mebane interests, provided executive guidance to the new organization when Marshall Field assumed control of six mills in Spray and Draper. Following the Pitchers, four bachelors (Karl Bishopric, J. Frank Wilson and Messrs Lindsay and Taliaferro) lived in the house until Benjamin Carter Trotter, Marshall Field attorney, moved in with his family in the mid-1930s.

After Mr. Trotter's death, Fair Funeral Home purchased the house. Although several outbuildings (including two small dwellings for servants) have been removed from the rear of the property. A water tower with a wind-powered water pump remains close to the south corner of the house.  Mr. & Mrs. Charles Fair resided in the home for 35 years until their death in recent years.  Fair Funeral Home remodeled the home in 2011-12 and opened it as a Event Center and Banquet Hall.